What have we learnt 10 years after the collapse of Lehman Brothers?

The long-reaching tentacles of the 2008 Financial Crisis continue to influence our day-to-day lives.

1. If only we’d listened to Minsky

Few had heard of economist and theorist Hyman Minksy before the financial crisis.

Minsky’s “financial-instability hypothesis” argues that extensive periods of prosperity have a tendency to cause the next crisis.

As a result, imbalances and vulnerabilities gradually grow within the financial system. This eventually culminates in a financial crisis.

Perhaps surprisingly, before the Financial Crisis, which began with the collapse of Lehman Brothers, the accepted view within macroeconomics was remarkably different to Minsky’s. Efficient markets and rational expectations were the words on everyone’s lips.

At the heart of these beliefs, and the models they spawned, was ‘Homo Economicus’ - an, ironically, flawed vision of humanity being perfectly and constantly economically rational. In this world, asset bubbles were averted by these prudent automatons rationally cutting risk exposure as the booms progress. Essentially bubbles were to be denied the hot air that feeds them by good common sense.

The decades of relative economic prosperity - the Great Moderation - that lasted throughout Minsky’s life time promoted this ideal.

The flaws in the economic dogma may seem obvious with hindsight, but this orthodoxy was only shattered when the financial crisis struck.  It taught us that markets and the financial system aren’t self-regulating. They can be prone to bouts of over-exuberance and excessive risk-taking (figure 1) and the repercussions of their failure can extend far beyond the financial services sector.

Finance goes through booms and busts 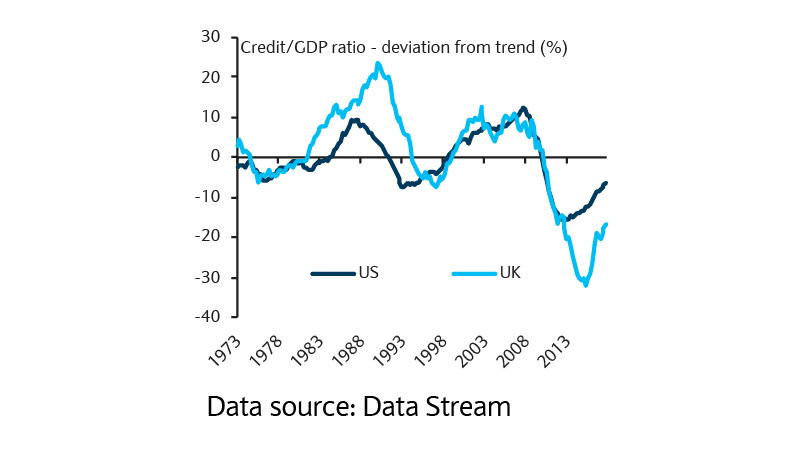 For investors, this very human penchant for bouts of extrapolative optimism or pessimism can create opportunities amid mispricing.

We believe there will continue to be a role for both active and passive investments in the world we live in, due to this human imperfection.

While markets do price incoming data efficiently, it is these human behavioural biases that create the opportunity to earn slightly more than the average return. Of course, this only works if we can avoid the same behavioural pitfalls.

When the crisis hit, we may think ourselves lucky that it was a student of the mistakes of the Great Depression sitting in the world’s top seat. Federal Reserve Chair Bernanke and his colleagues at the US central bank deserve tribute for their role in avoiding a depression.

The policy mistakes that led to the economic and social horrors of the 1930s were thankfully not repeated. Apart from aggressively cutting interest rates, the Federal Reserve famously used the unconventional monetary policy of making large scale asset purchases (quantitative easing) so that interest rates were lowered over the long-term (figure 2). 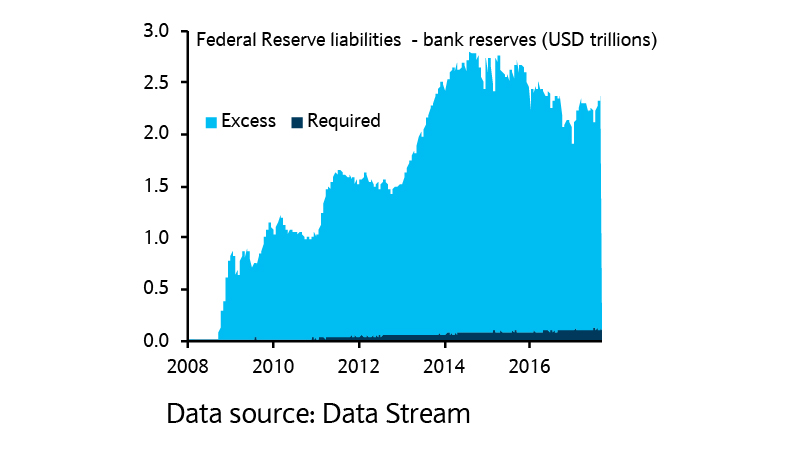 Importantly, this also led to central banks becoming much more active regulators of the financial sector. Increased capital requirements, multi-agency stress tests on systemically important banks, and prohibitions on proprietary trading are just a few of the regulatory changes that took place after the crisis.

Thanks to these measures, the global financial system’s most systemically important institutions are more resilient to sudden shocks, when compared to the previous 10 years (figure 3). 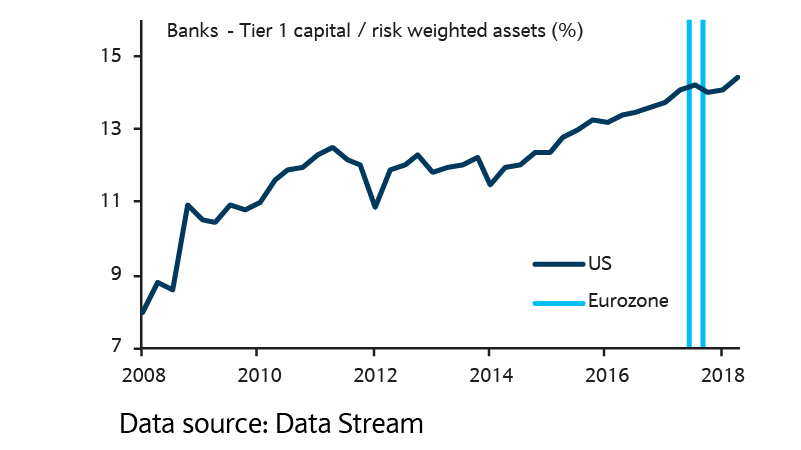 The crisis affirmed the necessity for a competent central bank, that is able to direct the correct amount of monetary medicine to the economy, as well as the scope and incentives to play party pooper if needs be to avert future financial crashes.

3. Why a long-term view matters

Even if you were unlucky enough to buy at the peak of the S&P 500 before the crisis sparked in the fourth quarter of 2007, you would still have twice your invested capital today.

Of course, if you had avoided this peak and bought when markets were at rock bottom in 2009, you would have multiplied your investment five times (figure 4). 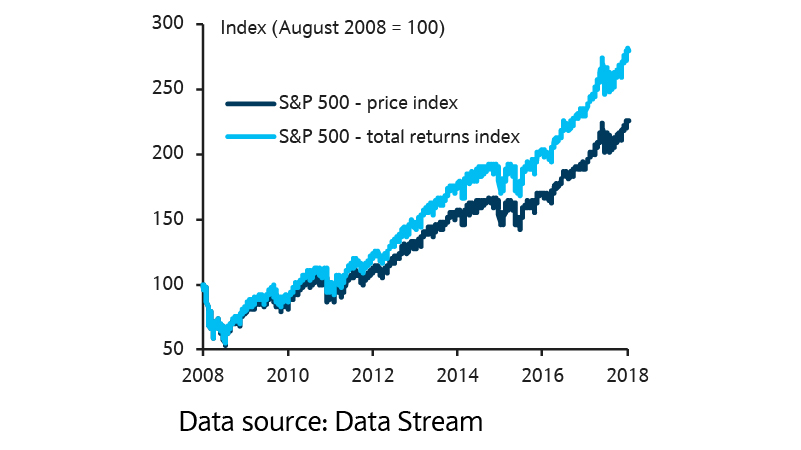 But despite boasts to the contrary overheard on the golf course, very few investors did this.

It was ironically the ruthlessness of the crisis that sowed the seed for the market’s dramatic revival. The crisis saw massive write downs of financial assets at banks, insurers and large manufacturers with sizable financing departments, causing the biggest proportionate drop in corporate earnings to date. 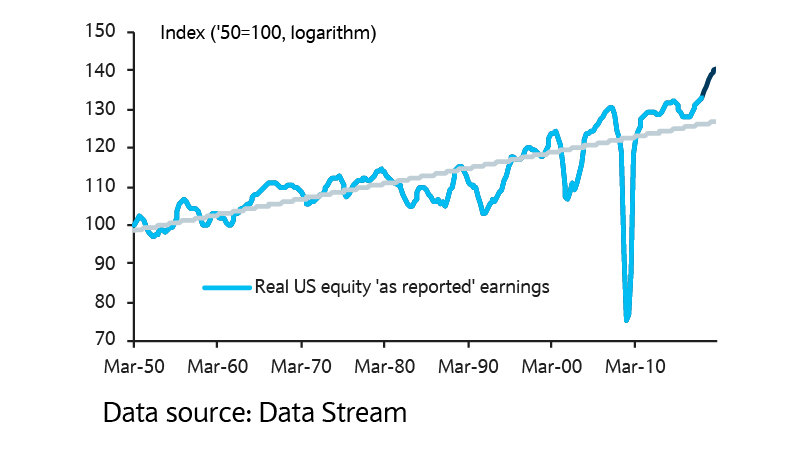 Today, US corporate profits are now 15 times, or roughly 1500% higher than the lowest point hit in 2009, as companies have benefited from a global economy that has time after time perplexed its many detractors.

The US stock market’s performance a decade after the crash is testament to the virtues of taking a long-term investment view. The longer your timescale, the more the investment odds are stacked in your favour (figure 6).

Taking a longer view pays off 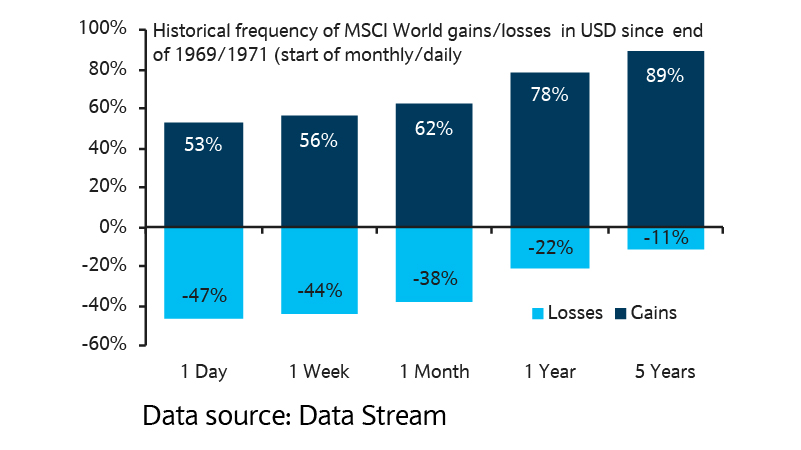 After years of diminishing prices, London’s prime and super-prime property market conditions stabilised in the first six months of 2018

An on-the-go instant overview of your investments, accounts and other products from Barclays¹.