A myriad of international buyers continues to be drawn to homes in London as the sector improves, whether it’s listed mansions by Regent’s Park to penthouses overlooking the Thames.

In fact, international buyers now account for about three-quarters of all super-prime property purchases in London - it’s still rated the world’s most attractive city [PDF, 5.70MB]. And, many other parts of the UK are attracting foreign buyers too.

This is unsurprising considering strong demand in the prime London property market has generated returns of almost 300% over the last two decades1.

Political turbulence has knocked the UK’s residential property market in recent years, including the UK’s Brexit referendum vote. A series of property tax reforms have also created some fallout2.

But, now the sector’s outlook is improving.

After years of diminishing prices, conditions stabilised in the first six months of 2018.

Property buyers from across the UK, Europe, the Middle East and Asia continue to flock to London, looking for a place to call home while their children study in the UK, or to own as part of a carefully-planned strategy of portfolio diversification, despite wider market uncertainty.

Prime property is categorised as the top 10% of any local market, according to Knight Frank, while super prime covers properties worth more than £10m (US$12.8m) in London, and more than £5m (US$6.4) in the rest of the country.

“There may be volatility in prices over the short to medium term, but residential property is likely to remain an appealing asset for many investors,” comments Syed Raza, Head of Global Banking and Credit Solutions at Barclays Private Bank.

“While the political upheaval of recent years has certainly given buyers pause for thought, the low cost of borrowing continues to underpin the market – and, for overseas buyers, the depreciation of sterling has offered significantly increased value,” he adds.

Prices and the number of purchases in London’s super-prime market have tumbled in the last four years. In Chelsea, for example, sterling prices at all levels dropped by 15.5% from August 2015 to March 20183.

Despite the number of sales in the year to March 2018 being 9% lower than the 126 transactions recorded over the previous 12 months, this is still an improvement on the annual falls of more than 20% registered throughout 2016 and the first half of 2017.

The sterling’s dip in value is a key reason for this, triggered by the UK’s Brexit vote in 2016. This is an important driver for international buyers as many are capitalising on the enhanced purchasing power of their domestic currency1.

For example, US buyers would have enjoyed an effective discount of 11% at the end of March 2018 compared to the period before the EU referendum.

Another factor is that sellers have become more realistic about pricing. The average discount between the asking and the achieved price [PDF, 2.95MB] for super-prime properties in the first quarter of 2018 was 10%. This compares to 6% in 2016 and 4% in the same period of 2015.

In particular, many are tweaking their asking prices to take into account of the recent sizeable hike in stamp duty, agents say, which was introduced in December 2014 and then again in April 2016. These changes particularly impact the most valuable properties on the market.

But, this doesn’t mean that the Capital’s super-prime property market’s headwinds have dissipated.

The uncertainty over exactly how the UK will unravel itself from the European Union may cause some buyers concern.

Nevertheless, the recent depreciation of sterling has left London looking like an increasingly good deal when compared with other popular international cities, while its traditional attractions, such as culture and education, still charm buyers. The prospects for London’s super-prime property market now look more encouraging than they have done for a while.

“Low interest rates, the value offered by sterling, and London’s attractiveness to a global audience are all important positives,” says Barclays’ Syed Raza.

Tom Bill, Head of London Residential Research at Knight Frank, adds, “Drivers such as London’s status as a global financial centre and the quality of its schools are as strong as ever.”

International pupils make up 5.4% of all children at British independent schools according to the Independent Schools Council [PDF, 2.94MB]. The number of Chinese students studying in the UK has surged, with figures almost trebling since 20074

Super-prime market trends in London are mirrored in the Capital’s prime market. Stamp duty reform and political uncertainty remains a curb on transactions, although there is some renewed market momentum, with a potential prices hike in the latter half of 2018.

Buyers seem to be returning to the market, explains Knight Frank’s Paddy Dring. “In the prime market, those moving for specific needs – to upsize or downsize, for example, or for their children’s educational needs – are driving the market again,” he says.

Land Registry data [PDF, 794KB] suggests prime property sales volumes are now being restored. Small annual increases in the number of £1m and £2m-plus properties sold outside London’s Zone One have been reported in recent months for the first time since 20165.

As with the super-prime market, sellers’ price adjustments for stamp duty have eased purchases. The cost of stamp duty tax is now at least somewhat alleviated by lower asking prices. Even so, buyers are still driving a hard bargain.

In April 2018, the average prime central London home took 25% longer to go under offer than in January 2016, even though the average number of viewings was up 35% over the same period5.

That added value is significant, both to buyers looking primarily for a home and mainly looking for investment purposes. The yield on prime central London homes is currently about 3.2%, Knight Frank data shows. That is close to a six-year high and a two percentage point premium over 10-year government bond yields1.

“Aside from the hard calculations, London retains its appeal on the international stage, despite the Brexit debate,” explains Barclays’ Syed Raza.

“The recent Global Power City Index [PDF, 5.70MB] still rated London as the world’s most attractive city, and for the sixth year running, on the basis of its economic prospects, but also the lifestyle it offers,”6 he adds. 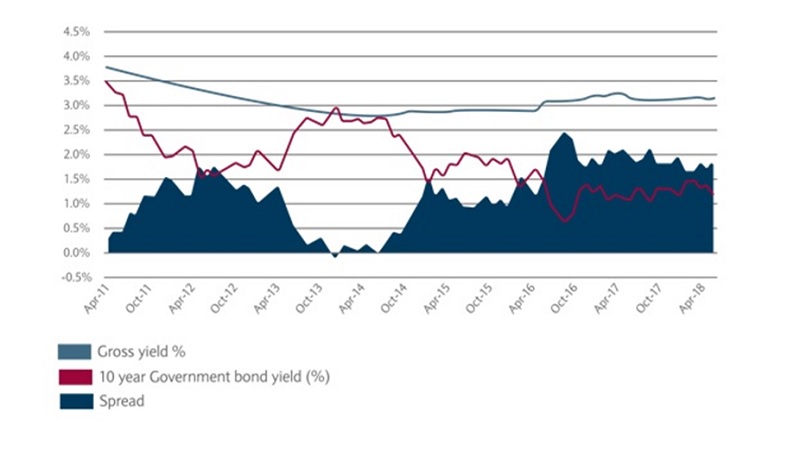 A surprise rise for rental values

Rental value growth will make a return this year in the UK prime lettings segment after a challenging 2017, Knight Frank predicts [PDF, 775KB]. In London Growth of 0.5% is forecast for London in 2018. Compare this to most of 2017, where rents were falling at rates of around 4% to 5%7.

The prime lettings sector slowdown in recent years is mainly because of high levels of supply. More owners have decided to let their properties until the outlook for house prices becomes clearer against the setting of the UK leaving the European Union and increases in stamp duty.

The EU referendum has also made some corporate tenants to think twice before committing to tenancy agreements or to seek out cheaper rent. In the financial services industry in particular, there is widespread nerves about the stipulations of the Brexit deal, with warnings that there could be an exodus of executives to other European financial hubs8.

While Brexit jitters have inhibited rental value growth, some landlords are now edging out of the segment after several government tax reforms. For example, landlords are losing the right to set mortgage interest payments against tax. Knight Frank argues that any additional taxes [PDF, 966KB] could curb market activity.

Following this period of increased supply and lower rents, there are now more landlords looking to sell their properties. In fact, Knight Frank has reported a 15% decline [PDF, 775KB] in the number of properties listed for rent in the 12 months to April 20187. This contraction is now creating an upwards pressure on rents.

Still, investors will need to be careful about picking the right properties to cash in on this trend. Knight Frank’s data shows that while the number of London tenancies agreements for more than £5,000 a week increased by 24% over the year to April 2018, tenancies worth between £1,000 and £5,000 rose by just 1%7.

Stability seems to have made a comeback in the UK’s prime and super-prime residential property markets. The outlook is more encouraging, with continuing low interest rates and demand from a diverse range of domestic and international buyers underpinning prices in the future.

It remains a buyers’ market as purchasers are determined to secure good value as they buy for the long-term, often with plans to pass property on to the next generation.

However, it is the sellers that are prepared to be realistic about purchase prices that are securing deals.

The political questions facing the UK could still change the picture, particularly if the terms - or lack of terms - for the Brexit deal are unsatisfactory. However, events in other parts of the world put this in perspective and optimism is now the predominant emotion in the sector.

“High-value UK property will continue to attract buyers motivated by the need to move home and those seeking exposure to property as they look to diversify their investment portfolios beyond equities, bonds and other assets,” concludes Syed Raza.

If you’re an International Banking client looking to buy property, Barclays can support you every step of the way. For everything from support identifying the right property, to getting specialist finance, call us on +44 (0)1624 684316* or chat to us.

A decade after the fall of Lehman

A decade after the collapse of Lehman Brother, it’s important to understand what investors have learned from this seismic event.

An on-the-go instant overview of your investments, accounts and other products from Barclays¹.