Market turbulence like we’ve seen so far this year can feel uncomfortable, but there are many reasons not to panic.

Volatility is a common feature of investing, especially in stock markets. Market corrections – typically defined as a fall of +10% from the most recent peak – occur frequently. Looking at historical performance, the S&P 500 index has experienced one roughly every 12 months. Despite these setbacks, over the past 20 years, the index has produced a total return of more than 450%, or 9% per year (based on our in-house assessment of historical Bloomberg data as of 27 January 2022. Past performance is never a guarantee of future performance).

Overall market volatility, as measured by the VIX index, is still comparatively low. But after a period of strong positive returns since the pandemic-driven sell-off in March 2020, it may feel worse than it is, simply because we are not used to it.

We do expect to see further bouts of volatility this year, but these should be relatively short-lived.

What’s behind the current volatility?

As the world adjusts to living with COVID-19, central banks are moving from survival mode, to a focus on stabilisation. With inflation rising, keeping interest rates at such low levels is no longer viable. This shift in stance is, not surprisingly, unsettling markets after an extended period of unlimited support.

The prospect of interest rate rises initially hit high-growth, low-profitability stocks the hardest, as their valuations are more dependent on future cash flows, but the sell-off has since become more widespread as investors have become more risk-averse.

What can we expect for US rates?

At a press conference on 26 January, the US Federal Reserve (Fed) signalled it would start raising interest rates in March, and adopted a more hawkish tone. Investors have been expecting rates to rise in 2022 for some months, but the number of hikes priced in by the market has gradually increased, from one back in October, to as many as five following the recent update.

While many investors took the Fed’s statement to be “more aggressive than usual”, we are more balanced in our interpretation of the message. If inflationary pressures ease later this year as we expect, we believe the Fed will adapt accordingly and slow the pace of any policy normalisation.

Five reasons to be positive about equity markets

1. The market may be overestimating future rate hikes

In our view, the Fed has done much of the hard work in preparing the market for rate hikes. With close to five hikes now priced in for this year, we think there’s a higher chance of the Fed under-delivering (rather than over-delivering) on the market’s expectations. 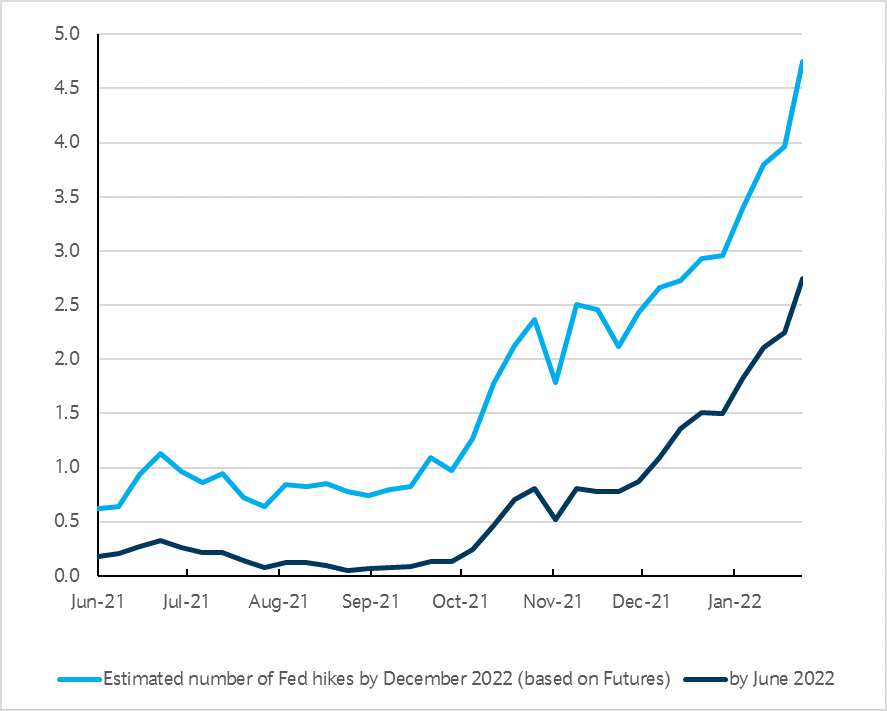 Please note: Forecasts are not a reliable indicator of future performance. The value of investments can fall as well as rise and you may get back less than you invested.

2. Investors may have oversold

The market sell-off this year has been fast and deep, and may well have gone too far. The S&P 500 Relative Strength index is currently at very oversold levels, close to those seen in the pandemic-fuelled decline in March 2020.

The latest US earnings season is progressing well. About 50% of companies have reported quarterly results, and are on track to deliver earnings growth of 24% versus last year, slightly higher than analysts’ consensus. Management guidance has been much better than price action would suggest, and expectations for 2022 earnings remain positive (+8.5% year on year for US companies).  (Source: Bloomberg, Barclays Private Bank. January 2022). 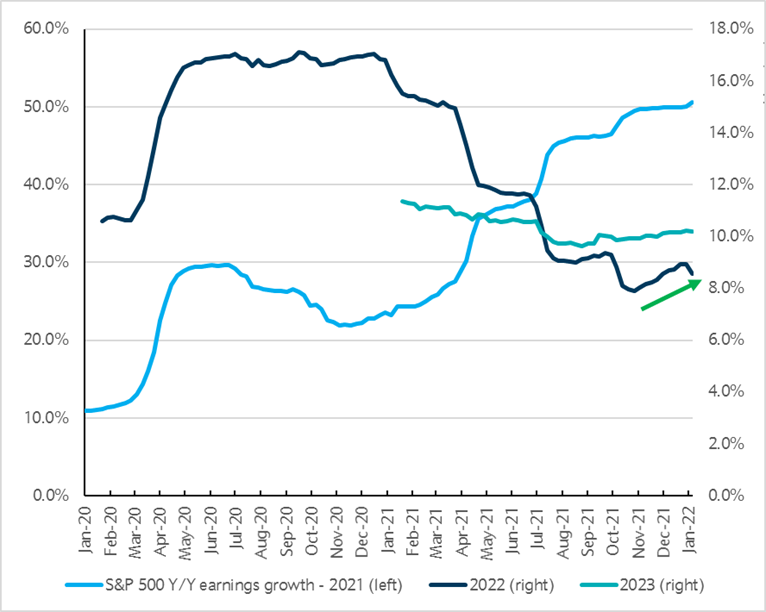 The correlation between stock returns has fallen dramatically, potentially creating a very favourable environment for stock pickers. Even if the overall market suffers, performance of the underlying stocks may vary widely. 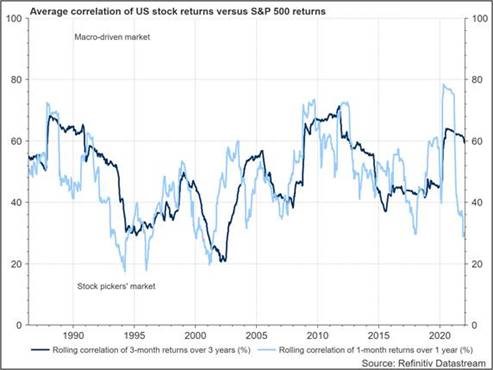 History shows that investors who keep calm during market volatility, and hold their positions for the long term, are likely to be rewarded. By looking at various market setbacks from the past 30 years, it paints a picture of long-term reward when investors stay invested.

The market volatility we’ve experienced this year was not unexpected. Stock markets rarely move in a linear fashion for long; they tend to swing from optimism to pessimism, often overshooting on each side.

As such, the recent weakness is nothing to fear. This is, in our view, a case over market overreaction, which should present some attractive buying opportunities for long-term investors.